A friend shared this on Facebook and was blown away – so powerful without a single word uttered. It was created for LG by Nuno Rocha and I strongly suggest you check him out over on Vimeo.

MOMENTOS from Nuno Rocha on Vimeo.

There’s not much I can say about this. Just listen to that up there and if you enjoy it, consider:

Thank you very much.

I’ve been a massive fan of Spotify since I was first made aware of it in late 2010. In fact I still remember how amazed I was at the technology, the interface and the whole concept. Since then I’ve been using Spotify pretty much daily and have since migrated to the Premium plan.

Admittedly this only happened when Spotify started limiting free accounts to 10 hours of playing time, but I was so in love with the service I was more than happy to start paying.

Now I use the Android application to listen to my music or the recently discovered stand up comedy wherever I am.

END_OF_DOCUMENT_TOKEN_TO_BE_REPLACED

Ed Sheeran – You Need Me I Dont Need You Music Video

I first heard of Ed Sheeran (@edsheeran) while watching coverage of Glastonbury 2011 and his live set left me stunned. Since then I’ve been following his new releases and this video has just dropped. I’ll be honest, I prefer the live version of this song by miles but the video is great and I couldn’t resist posting it.

Here’s Ed Sheeran – You Need Me I Dont Need You at Glastonbury 2011 (starts about a minute in). Compare and contrast!

As an experiment to see if search trends can predict the future, Google have set up a small microsite allowing you to browse search trends best on award categories at the Oscars. 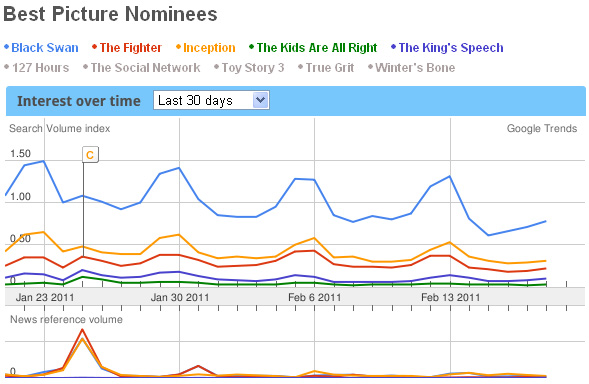 It’s not the first time Google has made it easy for people to monitor search trends for specific events, the UK 2010 elections is a good example, (although the data is now limited to the last month). What’s really interesting is the potential for search trends to give insight into the outcome of future events, whether they be political, award shows or perhaps even the sentiment of the people regarding military action.

A quick search in Google Trends shows interest in the Iraq War has dropped consistently since 2004 among UK searchers – is this due to reduced media coverage or a general loss of interest in the population? (probably a combination of both).

I look forwarding to expanding on this topic a little more in the future, so before we get to heavy, let’s get back to the Oscars.

How accurate are these predictions likely to be? Well, it’s very had to say. The trends displayed by Google almost certainly don’t filter these films trends based on the category they’ve been nominated for, so the awards in italics are ones I think Google Trends may have right and others are difficult to call.

Let’s come back in a week or so and see how Google did!